Background:
Born about 1882, at Alnwick, the son of Thomas (b. about 1850, at Alnwick; a Labourer at a Whinstone Quarry) & Catherine (also b. about 1850) Hetherington. N.B. The 1911 Census appears to record Thomas's wife as Jane but there's no obvious reason to doubt she's the same person as recorded in the 1901 Census.

Hetherington was one of eleven children, eight of who were still alive in 1911. In 1901, he was still living with his parents & an older brother, William (b. about 1880); a younger brother, George (b. about 1891); & an older married sister, Mary Thompson (b. about 1877). Then, he & William were Agricultural Labourers. All of Hetherington's siblings were born at Alnwick.

Hetherington was a Forester.

The UK, Army Registers of Soldiers' Effects, 1901-1929 (available via Ancestry.co.uk) records Hetherington's sole legatee as his widow, Elizabeth, who may have remarried when the War Gratuity was paid in 1920 - she is recorded as Elizabeth Hall.

Local Memorial:
Alnwick War Memorial (N.B. There is only one H. Hetherington listed on the War Memorial & it's unclear if this will be Corporal Harry or Private Henry, probably the latter given the relationship with Thomas Alexander Hetherington.) 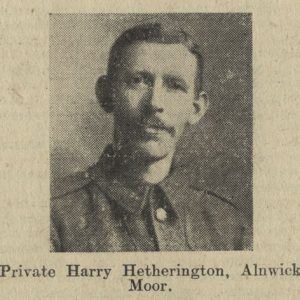