Service History:
Enlisted at London, in February 1916. 'The Valley Remembers' records Forster's unit as 3rd Battalion but the CWGC website has it as the 8th.

Fell near Gueudecourt during the 1916 Battles of the Somme.
(Source: 'The Valley Remembers'; Edited by Sandy Hunter; Upper Coquetdale WW1 Project; 2014; p.25)

Background:
Although Forster lived from much of his short life away from the Coquet Valley, Burradon, Rothbury was the family home. It was in the ownership of his father who had been born at Scrainwood, son of Thomas Forster of Scrainwood & Burradon. He practiced as a Solicitor at Newcastle upon Tyne, Northumberland until his appointment in 1916 as Clerk of the Peace & Clerk to Northumberland County Council.

Forster was born on 28 November 1892, at Jesmond, Newcastle, the second son of Charles Davison Foster & his wife, Annie Mary, daughter of Thomas Thornton of Felton House, St. John's Wood, London. He was one of eight surviving children.

At the turn of the century, the family was living at Glanton, Northumberland but, by 1904, Forster was at school at Downside & in 1910 was an undergraduate at Trinity College, Cambridge where, in 1913, he graduated BA & LLB. He was then an Articled Clerk in the London law practice, Coward & Hawksley, Sons & Chance, a forerunner of today's global firm, Clifford Chance. He was living at Harrow, until his enlistment into the Royal Fusiliers in February 1916. 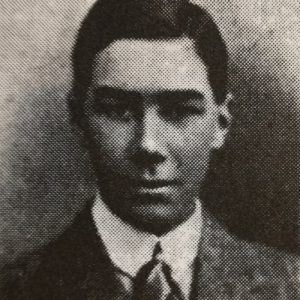