Discharged as no longer fit for war service on 20 November 1917 after returning from service in West Africa during which time Forrest suffered from several attacks of Malaria. Issued the Silver War Badge, which was issued in UK & the British Empire to service personnel who had been honourably discharged due to wounds or sickness from military service in World War I - Badge #309714

Forrest's Short Service Attestation form is available via Ancestry.co.uk together with his pension / service records however there appears to be no CWGC record for him.

Background:
Born in 1890, at Warkworth, Northumberland, the eldest son of Dr John Sumers Forrest (b. about 1860, at Carnwath, Lanarkshire, Scotland), by his late wife, Laura (b. about 1864; at Sedgefield, County Durham), of 56, The Butts, Warkworth. 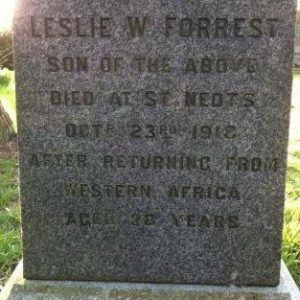