Service History:
Before the war, served for some years in the Durham Militia.

The UK, WW1 Service Medals & Awards Rolls, 1914-1920 (available via Ancestry.co.uk) records Culley first disembarked on 12 May 1915 at which time he appears to have been serving with the Cameronians (Scottish Rifles) 9th (Service) Battalion. As such, he was awarded the 1914-15 Star.

Badly wounded in September 1915. After recovery, returned to the Western Front in June 1916 having transferred to the Royal West Kent Regiment.
(Source: findagrave.commemorial56180303geoffrey-matthew_george-culley)

Husband of Elizabeth Frances Culley (nÃ©e Twynam; of Soberton, Hampshire), of Colscombe, Dorset. They had a son, Geoffrey, born on 27 September 1916, at Wardour, Wiltshire.
(Source: findagrave.commemorial56180303geoffrey-matthew_george-culley) 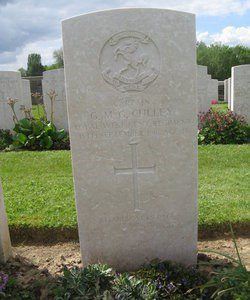