Service History:
After being appointed to the Army Chaplains' Department in November 1914, CreIghton was sent to the New Army being formed at Folkstone, Kent. In March 1915 he joined the 29th Division as Chaplain to the 86th Infantry Brigade.

The Division, made up of units returned from service overseas, was despatched to Gallipoli via Egypt. It was involved in very heavy fighting & suffered enormous casualties. Creighton, apart from being Chaplain, worked with the Field Ambulance teams at the front & was often exposed to enemy fire. By August the Gallipoli venture had failed. Creighton had diphtheria & was evacuated to Alexandria, then to the Anglo / American Hospital at Cairo.

On recovery he was put in charge of the Churches' work to establish recreational facilities for the wounded throughout the area, which he did with great success.

Arriving back in London in January 1916 he was posted to the Remount Division at Ramsey, & then joined 3rd Division artillery as Chaplain & travelled with them to Bus in France. He remained with the Division until his demise.

During the 1918 German Spring Offensives 3rd Division was rushed forward to meet an attack on 9 April. During this time, they were exposed to the heaviest shelling they had ever experienced. Under these conditions there was difficulty in arranging the burial of the many men killed as their bodies were spread about. Creighton volunteered to undertake the organisation of burial parties. He went up to a battery position but a shell burst near him killing him instantly, along with three men with him.
(Source: 'The Fallen of Embleton 1914-1919'; Written & researched by Terry Howells, Mary Kibble, & Monica Cornall; pp. 53-55)

Background:
Born on 10 June 1883 in the Vicarage at Embleton, the sixth child of Dr. Mandell Creighton (b. 1844 at Carlisle, Cumberland; Vicar of Embleton from 1874 to 1884, when he left to became Canon of Worcester & ultimately Bishop of London), by his wife, Louise Creighton (nÃ©e Hume Van Glehn; b. 1850, at Sydenham, Kent).

Educated privately until 1895 when Creighton went to Marlborough School. By then he was already determined to be a Clergyman.

In 1901 Creighton's father died, & in the autumn he went up to Keeble College, Oxford. He was 22 when he graduated with an upper second & decided to gain experience, before going to theological college, by becoming an Assistant Master at an English-run boys' school in Smyrna, Greece, from September 1905 to July 1906. He was licenced as a lay reader by the Bishop of Gibraltar, so he could help with services at the school & work for the Mission for Seaman.

On returning home, Creighton read for Orders at Bishops Hostel, Farnham & was ordained in St. Paul's Cathedral by the Bishop of London in October 1907. Then, he spent 3 years working in the slums before sailing to Canada in August 1910. He devoted his time there to working at establishing churches in rural Alberta but returned to England in October 1914 to join the war effort, offering himself as a Chaplain to the Forces. 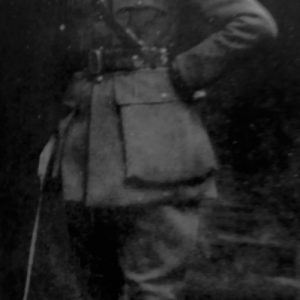