In April 1917 Cowe's battalion was stationed in the Pas de Calais region of France & took part in the Second Battle of the Scarpe (23-24 April). They were charged with attacking the fortified village of Roeux, east of Arras.

The ground before Roeux posed many difficulties for the British, two of which were the Arras-Douai railway line & the River Scarpe with its surrounding marshland. The British commanders were using this attack to draw German troops away from the failing French attack on the Aisne river.

The British attack on 28 April started at 04:25hrs & immediately encountered heavy machine gun & rifle fire from an unregistered enemy trench & a nearby Chemical Works & other buildings. The battalion on the right was held up after advancing only 150 yards. The 25th Battalion reached its objective on the left flank & commenced to dig-in, but the fire from the enemy trench made this work very difficult, so much so that, after dark, the battalion returned to the original British front-line as it was in danger of being cut off by parties of the enemy who were working round the flanks. 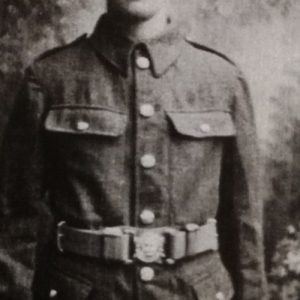