After 5 months training, he embarked at Folkestone, on 10 July 1916, & joined the 1st Battalion of the Gordon Highlanders, on 23 July. On 18 August 1916, just five weeks after landing in France, he was seriously wounded during the Battle of the Somme & sent to a hospital near Northampton to recover.

By 24 March 1917 he was back in France & joined the 1/6th Gordon Highlanders, on 14 April. He was badly wounded in the right thigh 9 days later during the Battle of Arras. Repatriated on the same hospital ship as for his first wound, the Â‘Jan BreydelÂ’, he was admitted to the military hospital at Duston, near Northampton & died there, on 18 May, due to gas gangrene infecting his wounds.

His coffin arrived at East Linton railway station on 21 May 1917 & was met & escorted by a detachment of the Machine Gun Corps who fired a three volley salute over his grave in Whittingehame Churchyard.

Background:
Born about 1890 at Whittingehame, near Haddington in the parish of Traprain, East Lothian. He was brought up by his mother, Mary, grandmother, Alison, & his uncles & aunts at Drem Farm, Athelstaneford.

By the age of 11, he was living with his mother & step-father, Alexander Bisset, a Ploughman, & his half-brothers & sister at East Bearford near Haddington.

Aged 23, he took up employment with Sir Stephen Aitchison at Lemmington Hall, near Edlingham, Northumberland as a Gardener.

His next of kin listed in the cemetery records is given as Mr. David Bissett, Farm Cottages, Little Spot, Dunbar, East Lothian, Scotland. 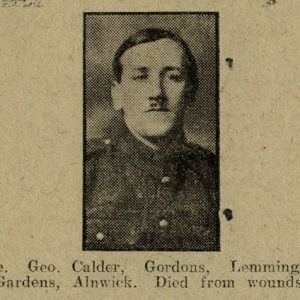