Service History:
Enlisted at Alnwick, Northumberland on 8 September 1914 as a Private in the Northumberland Fusiliers, 7th Battalion Territorial Force.

He left Folkestone & arrived at Boulogne in France on 21 April 1915. On 27 April 1915, while in action at St Julien, he was struck by a shrapnel shell in the head & very severely injured. He was treated in the field & transferred to Rouen on 29 April. During the early part of May he became critically, then dangerously ill, but he improved slightly & was returned to England on 2 June 1915. He received further treatment at the Military Hospital & VAD Hospital, York for about 3 months.

He died at Royal Victoria Infirmary, Newcastle upon Tyne, on 30 March 1917 from wounds received in France.

He was almost 5 ft 7 in tall, with dark brown hair, blue eyes & a fresh complexion.

He married Mary Farr from Denwick in the summer of 1914 & lived at 13, Market Street, Alnwick. The couple had two daughters, Annie & Mary. 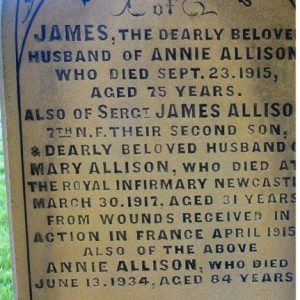