Service History:
Drowned as result of attack by enemy submarine.

SS Marquette was a British troopship of 7,057 tons which was torpedoed & sunk in the Aegean Sea 36 nautical miles (67 km) south of Salonika, Greece by the German submarine U-35, with the loss of 167 lives.

The ship was originally planned as the SS Boadicea, for the Wilson & Furness-Leyland Line, but was acquired by the Atlantic Transport Line shortly after completion to replace ships requisitioned during the SpanishÂ–American War. She made a single voyage under the name Boadicea, & was renamed Marquette on 15 September 1898.
(Source: en.wikipedia.org/wiki/SS_Marquette_(1897))

Background:
Born about 1877, at Chatham, Kent, the son of Hannah Wilson, of Prudhoe Court, Alnwick, Northumberland, & the late John Wilson. 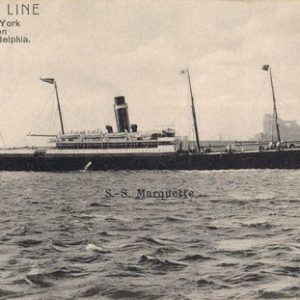