Service History:
Enlisted at Anstead, Northumberland.
(N.B. The exact place of enlistment may be questionnable unless, perhaps, Wake was signed-up by a recruiting party touring Northumberland farms. Conceivably, he may have volunteered along with his brother, Thomas Henry.)

Background:
Born at Belford, the son of Richard & Mary Wake, of The Gatehouse, Bamburgh Castle, Northumberland.

One of two sons lost: see, also, Private Thomas Henry Wake (Regimental service #1989; Northumberland Fusiliers, 1/7th Battalion Territorial Force). The brothers were killed on the same day as each other. 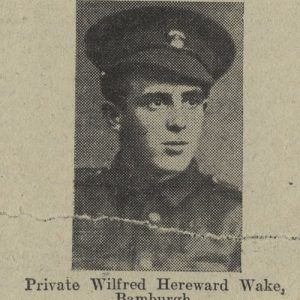