Service History:
Thorp enlisted with the Royal Fusiliers, 21st (Service) Battalion (4th Public Schools) in October 1914, thus entitling him to the 1914-15 Star. His regimental service number was PS/3294. He reached the rank of Sergeant before being posted to the Oxford School for Officers in 1916 after which he was gazetted later that year as a Second Lieutenant with either the 1st or 3rd Battalion, the Northumberland Fusiliers.

On 14 October 1916, Thorp was involved in a raid on German trenches at a point opposite Luke Copse to secure important information about the line of the enemy's artillery. The raid was led by Lieutenant D. P. Hadow & included 2 officers & 47 other ranks of Â‘YÂ’ Company. Thorp's role was to lead a Â‘souvenirÂ’ squad on the right flank, consisting of a NCO & 8 Â‘bayonet menÂ’.

When the raiding party reached the German trench, they found 2 German sentries on duty. One of the sentries attempted to attack the party but was wounded & taken prisoner by Thorp. The other was killed as he tried to run away. Shortly after, the signal was given for retreat & the raiding party returned safely to the British trenches having captured one prisoner & sustained no casualties.

Â‘The Fifth in the Great War...Â’ (Sandilands)Â recalls that Â‘On this night, Second Lieutenant Thorp, whose conduct throughout had been admirable, had been given a first opportunity to show the high qualities of leadership which were to distinguish him on many later occasions.Â’

For his part in the raid, in November 1916, Thorp was awarded a Military Cross &, according to theÂ 'Manchester Evening News',Â Â‘It is understood that the award of this honour is due to the part he played on raid to a German trench.'

The awardÂ’s citation reads Â‘For conspicuous gallantry in action. He led a successful raid against the enemy with great courage & determination, himself killing two of the enemy & capturing a prisoner.Â’

Joined the Berwick Naturalist's Club on 13 October 1904, & was, according to their history, Â‘a good entomologistÂ’.

Became a Schoolmaster & worked at the Mercer's School, Holborn in 1901; at Pocklington School from 1901 to 1905; at Trent College in 1905; at Scarborough College from 1906 to 1911 where he was the Modern Languages Master; & Thorp then went on to work as an Assistant Schoolmaster at Manchester Corporation School from 1911 to 1914 before joining the Army on the outbreak of WW1. 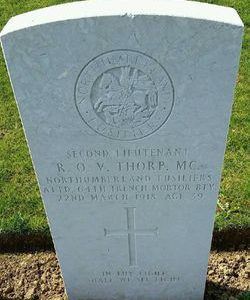