Background:
Born about 1892-93, at Glanton, Northumberland, the eldest child of Walter Scott Thompson (b.1868 at Wandystead, Northumberland; a Carpenter), by his wife, Mary Jane (b.1870 at Tweedmouth, Northumberland) who were living at Front Street, Glanton at the time of their son's death.

In 1901 the family lived at Low Powburn. They were still there in 1911, living at Breamish Cottage.

In 1911, he was a General Labourer. Brother James was a Telegraph Messenger. All the younger children were at school except for Walter. 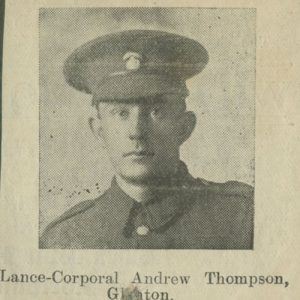