Service History:
On 2 June 1902, enlisted into the Regular Army & joined the 2nd Battalion of the Northumberland Fusiliers, Service #8574. He served both at home & abroad, & between 1903 - 1905 he was stationed in South Africa.

In June 1905, after completing 3 years of service he was placed on the Army Reserve List & returned to the UK.

On the outbreak of the First World War, Tait re-enlisted, at Amble, into the Regular Army & joined the 12th (Service) Battalion of the Northumberland Fusiliers, which later amalgamated with its sister 13th Battalion, on 10 August 1917.

The Battalion was in front-line trenches at Ouderdom, Belgium where, in the afternoon of 26 April 1918, Line Ridge Wood was subjected to very heavy shell fire. Total casualties numbered 82 OR including Tait, a Company Sergeant Major, & a Private who had been awarded a Military Medal. At least one officer was wounded.

'For conspicuous gallantry & devotion to duty. Before a raid he did valuable patrol work, and by his keenness & skill assisted greatly in the preparations for the operation. During the raid he took a prominent part in hand to hand fighting, in which all the enemy who offered resistance were put out of action. He showed great courage & skill.'
(Source: Bob Moore; Grandson; July 2017)

(N.B. The UK, Army Registers of Soldiers' Effects, 1901-1929 [available via Ancestry,co.uk] suggests the date of death could have been any time between 24-27 April. The Battalion's daily log clearly states 26 April.)

Background:
Born on 31 January 1884, the son of Adam & Isabella Tait of Clive Lodge, Clayport Bank, Alnwick, Northumberland.
Clive Lodge is at the entrance of Clive Villa, which had an expansive garden nursery, where Tait's father was employed as a Gardener.

The Tait family moved to the Forest Hall area of Newcastle, where the family expanded to include four sisters - Annie; Ethel; Jane; & Margaret. 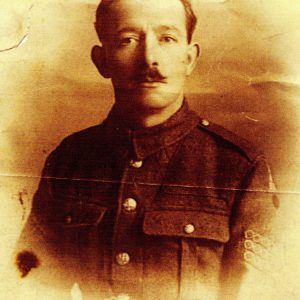 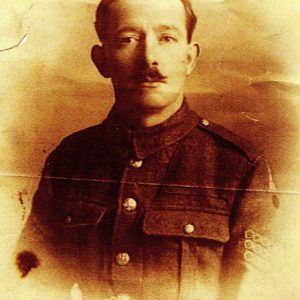 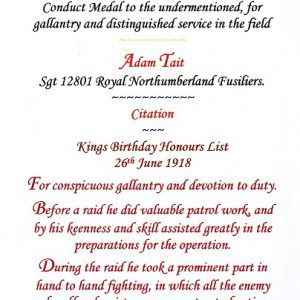 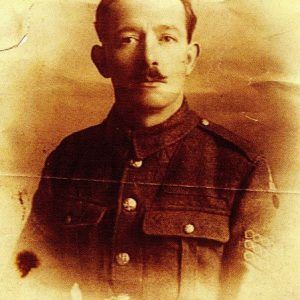