Service History:
Killed at the Battle of Jutland. As such, his body was not recovered for burial.

HMS Queen Mary was the last battlecruiser built by the Royal Navy before World War I. The sole member of her class, Queen Mary shared many features with the Lion-class battlecruisers, including her eight 13.5-inch (343 mm) guns.

She was completed in 1913 & participated in the Battle of Heligoland Bight as part of the Grand Fleet in 1914. Like most of the modern British battlecruisers, she never left the North Sea during the war. As part of the 1st Battlecruiser Squadron, she attempted to intercept a German force that bombarded the North Sea coast of England in December 1914 but was unsuccessful.

She was refitting in early 1915 & missed the Battle of Dogger Bank in January but participated in the largest fleet action of the war, the Battle of Jutland in mid-1916. She was hit twice by the German battlecruiser 'Derfflinger' during the early part of the battle & her magazines exploded shortly afterwards, sinking the ship.

Her wreck was discovered in 1991 & rests in pieces, some of which are upside down, on the floor of the North Sea. Queen Mary is designated as a protected place under the Protection of Military Remains Act 1986 as it is the grave of 1,266 officers & men.
(Source: en.wikipedia.org/wiki/HMS_Queen_Mary)

Background:
Born on 30 April, 1897, the second son of Thomas Swinney, a Colliery Mason, & his wife, Isabella.

The 1911 Census records two sons & three younger daughters. The oldest son, Robert (15), was employed as a Pit Pony Driver while all of the other children were still at school. Isabella & all of the children had been born at Alnwick, Northumberland but, in 1911, the family lived at 16, Fern Avenue, South Moor, Stanley, County Durham. 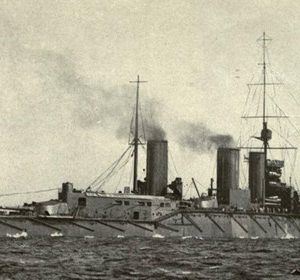