Service History:
Straffen's service records are available via Ancestry.co.uk although they're difficult to read, in places, & a degree of supposition must be applied!

He enlisted on 15 September 1914 & joined up at Scarborough, on 29 September, seemingly serving with the Northumberland Hussars.

Transferred to the East Yorkshire Regiment on 2 June 1915 with which regiment Straffen served with its 1st & 3rd (Reserve) Battalions, as well as at the Depot.

While serving with the 1st Battalion, Straffen was promoted to Acting Corporal, on 12 May 1917, then Acting Sergeant, on 31 July 1917 however it appears he may have asked to be returned to the ranks. Certainly, after he was wounded a second time he was posted to the Depot as a Private, on 24 October 1917. There, he was again promoted, to Acting Lance-Corporal, before his death is recorded, in February 1919.

On 3 February 1919, Straffen was admitted to Alnwick Military Hospital suffering from UHD (Usual Ductal Hyperplasia) which led to heart failure. A secondary cause of death was Oedema of the Lungs (excessive fluid in the lungs).

Straffen is not on the Alnwick War Memorial but is commemorated in St. Bartholomew's Church, Whittingham, Northumberland.

Background:
Born in July 1896, at Brunton, near Embleton, Northumberland, the son of John Straffen (b. Kirkharle, near Morpeth, Northumberland; a Domestic Coachman), by his wife, Isabella Straffen (nÃ©e Wales; b. at Wigtown, Dumfries & Galloway, Scotland), who lived at Breamish House, Powburn, Northumberland at the time of their son's death.

Educated at Embleton School, probably until about 1910.

The 1911 Census records Straffen's occupation as an Apprentice Butcher. The family lived at High Brunton, Christon Bank. Thomas had a younger sister, Edna (12).

After 2Â½ years apprenticeship as a Butcher, Straffen became a Groom, which was his occupation at the time of his enlistment.
(Source: 'The Fallen of Embleton 1914-1919'; Written & researched by Terry Howells, Mary Kibble, & Monica Cornall; 2014; pp. 67-69) 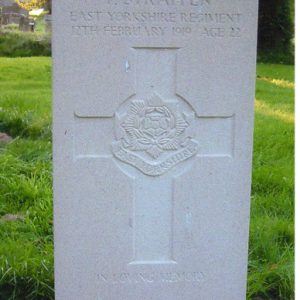 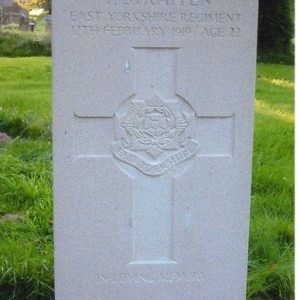