Service History:
Smailes's Attestation papers (including his physical description) are available online via Ancestry.co.uk. They are dated 8 February 1916, record his address as 78, Marshmount Road, Toronto.

In 1911 Smailes was still living at home with his parents, elder sister Mary (b. about 1885), younger brother Robert (b. about 1892), & an 11 years-old grandson of his parents, Robert Smailes Sutcliffe. All of the family were born at Craster except for the grandson who was born at Rennington, Northumberland.

At the time, Smailes was a Motor Driver carrying stone from local quarries to nearby railway stations.

Emigrated to Canada in 1912, sailing on 30 August from Liverpool to Quebec aboard Allan Line's ship 'Victorian'. 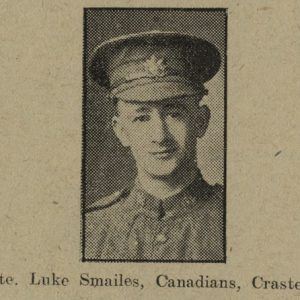