Service History:
Captain Selby was a Regular soldier having attended Sandhurst before being gazetted Second Lieutenant, unattached, on 8 January 1901, then appointed to the Northumberland Fusiliers on 23 March 1901. Promoted to Lieutenant on 21 May 1902, & to Captain on 1 October 1912.

Served on the North West Frontier, India & saw action in the Mohmand campaign at Matta.

Selby died from wounds received 24 hours after being shot while in action near Vailly during the 1914 Battle of the Aisne. At the time the Battalion were holding trenches near Rouge Maison & he was shot by a sniper hidden in nearby woods which the Battalion were clearing at the time. He never regained consciousness.

In his letter of condolence his Colonel wrote: '...Your son was one of the lion-hearted breeds that are such a power in a regiment. At the fight at Fromieres, the day after Mons, he did very gallant work under a heavy fire to the great admiration of the O.C. commanding 1st Lincolnshire Regiment with whom he was temporarily detailed...'
(Sources: 'UK, De Ruvigny's Roll of Honour 1914-18', Volume 1, page 322; 'The Bond of Sacrifice', Volume 1, August to December 1914, Page 353; & coldstreamhistorysociety.co.uk/) 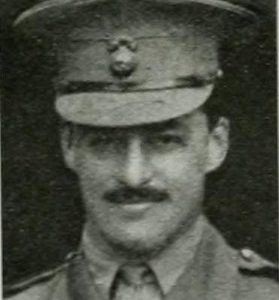