The 1901 Census shows Scott as a Railway Porter boarding with James Walker (a Colliery Labourer above ground) & his wife, Janet, at Front Clayton Street, Bedlington, Northumberland.

The 1911 Census records Scott as living at 5, Gordon Terrace, Bedlington with his wife, Hannah (nÃ©e Grey) & three children - William Ralph (7); Olive (2); & Thomas Gordon (4Â½) - plus a visitor, Margaret Grey (presumably, Hannah's elder sister). Scott, then, was a Tailor Maker. He & Hannah were married in 1901. She was from Bolton, near Eglingham, Northumberland.

Scott's great granddaughter, Carolyn Campbell, records that he does not appear on the Bedlington War Memorial possibly because the family moved to Mitford where her great grandmother, Elizabeth, worked as Housekeeper for Canon McCleod, vicar of Mitford Church.

Carolyn also relates that her grandfather was born at Chatton in 1902.
(Source: Carolyn Campbell; October 2017) 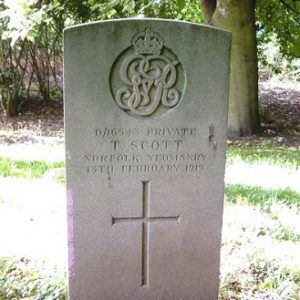