Service History:
Received a commission in the 2nd Battalion King's Own Scottish Borderers, 9 October, 1907. Promoted Lieutenant 24 March, 1909. Exchanged to the 1st Battalion, & went with them to Khartoum & India. There he made a special study of signalling, & when ordered to Ismailia, in October 1914, was appointed to General Wilson's Staff, & the following month gazetted Captain.

Returned to England during the formation & equipping of the 29th Division. Stationed at Rugby whence he proceeded to the Dardanelles.

Background:
Born on 24 May 1887, at Gosforth, Newcastle upon Tyne, Northumberland, the second son of William John Sanderson, of Eastfield Hall, Warkworth, Northumberland, by his wife, Amelia, (Amy; nÃ©e Wright).

Sanderson's father was a Brewer & Maltster who owned the Haymarket Brewery in Newcastle, was Lord Mayor of Newcastle, & founder of the J. W. Sanderson Home for Crippled Children in Gosforth.
(Source: 'Portraits of War...'; Edited & compiled by June Watson; Wildgoose Press; 2016; pp. 69-70) 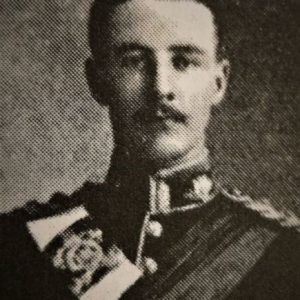