Obtained a commission as 2nd Lieutenant, 28 March 1917. Served with the Expeditionary Force in France & Flanders from 3 June.

Killed in action at Hollebeke & buried there in the Fusiliers' Wood.

His Captain wrote: 'Your son was killed in the early morning of 20 September, shortly after the commencement of the great battle in which we took part. He was killed instantly by a shell, whilst gallantly commanding his guns... Our machine guns did a lot of execution, & the enemy did his best to find us. I cannot tell you how deeply sorry I am personally at the death of your son... William was one of my best officers & highly popular with all of us. Our part of the attack involved a great deal of preparation. He was a keen & gallant fellow. I am sure you must be proud of him. His place here in this company will be difficult to fill.'

A brother officer, Lieutenant Eckersley wrote: 'The Company went into the line on the 19th inst. for the great push which started yesterday. I was left behind in charge of the camp. No details have yet reached me, except that William was killed within a few minutes of the start, probably by a shell. His loss is a great blow to us all & especially to me, for we were at Bisley together, & joined the Company together. He was an excellent & fearless officer & was highly esteemed by both officers & men. On behalf of Captain Champion, & the whole Company, I beg to tender our heartfelt condolence with you in your bereavement.'
(Sources: 'UK, De Ruvigny's Roll of Honour 1914-18', Part 5, page 14. Also, Web - fusilier.co.uk/north_east_northumberland_ww1_great_war_casualties/)

Four of his brothers also answered the call to arms. At the time of William's death, two were also serving on the Western Front; one was in Ireland; the other was in the South of England.
(Sources: 'UK, De Ruvigny's Roll of Honour 1914-18', Part 5, page 14. Also, Web - fusilier.co.uk/north_east_northumberland_ww1_great_war_casualties/) 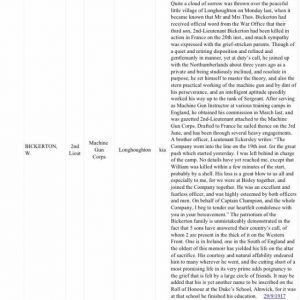 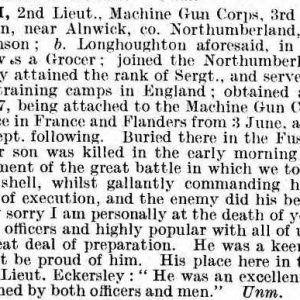 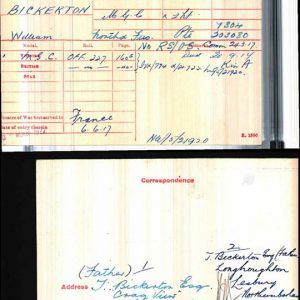